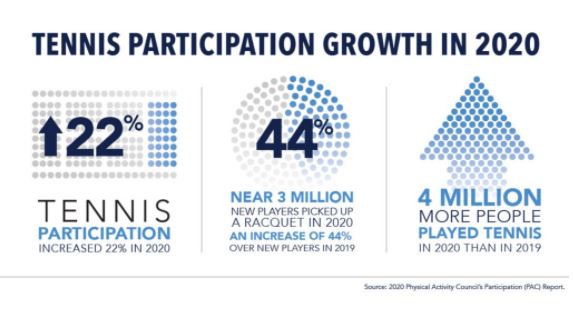 Tennis is the perfect social-distancing sport—and the numbers continue to prove it.

Tennis participation in the U.S. increased by 22% in 2020, with 21.64 million people hitting the courts, according to recent data from the Physical Activity Council’s Participation (PAC) report produced by Sports Marketing Surveys. The survey and report monitor more than 120 different sports and activities participated in by Americans.

Of the more than 21 million Americans saying they played tennis last year, 6.78 million were either new or returning/lapsed players. Nearly 3 million of those were first-time players, a 44% increase over new players in 2019. Additionally, the 3.82 million Americans who returned to the sport after time away was a 40% increase over the same measure in 2019.