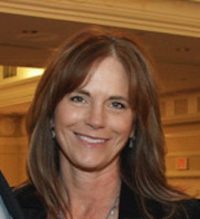 It was recently announced that Amy Brandon, Executive Director of the Lake Norman Tennis Association (LNTA), has been honored by both the USTA Southern Section and the USTA of North Carolina with their respective Spirit Awards. Both awards recognize a staff member or volunteer who exemplifies extraordinary spirit in growing the game of tennis. The USTA Southern Award is named for Marilyn Sherman, long-time USTA Southern Director of Adult Competition and Leagues. The USTA North Carolina Award is named for Peggy Golden, a long-time NC Tennis Association Board member and a member of the North Carolina Tennis Hall of Fame.

Amy’s recognition comes as no surprise to the board members of LNTA. She has tirelessly worked to grow the game of tennis throughout the Lake Norman footprint through programs such as Junior Team Tennis and the USTA’s Try Tennis program. She is also responsible for the creation of the popular ServeAces Mini-Tennis Bar League which launched in 2016 and was recognized as the 2016 USTA Southern & North Carolina Tennis Event of the Year.

“It is great to see that the USTA Southern and USTA North Carolina recognize Amy for being an enthusiastic advocate for the game of tennis throughout the Lake Norman region,” says LNTA President JD Weber. “You know you are doing good things when other CTAs want to replicate your programs, and ServeAces has gotten the attention of tennis organizers throughout the south,” he continues. “Combine that with her on-going efforts of bringing kids into the game through JTT and her work to create more Try Tennis Clinics throughout the area and it is easy to see how she would be recognized with these two honors.”